This case study highlights (a) poor family (b) differently abled mother (c) mother who got depressed because of family altercations and (d) mother who could not conceive. The case is a success story and highlights (a) the importance of maternal education,(b) importance of ongoing support and guidance through home visits, phone communication sms, (c) good quality health care (d) adoption of a continuum of care and integrated care during the first 1000 days (in utero and the first 2 years).The result was a normal female child who has grown and developed well, happiness and satisfaction in the mother, adequate child spacing and family togetherness.

M w/o LC is from Ch village in district Yamuna Nagar. She is 27 years old with 12 grades of education. Her husband is 31 with 5 grades of education. They belong to schedule class. M is a housewife and her husband is a vegetable vendor(income 3000 Rs per month). They live as a joint family with LC’s mother. M suffered from polio as a child.Consequently, she is differently abled. She gets a stipend of Rs 1000 per month from the government. The family is poor with no land holding. M was married to LC in 2007. She became pregnant within 1 month of marriage. She delivered a male child with birth weight 2.9 kg in November 2007 by untrained birth attendant at home. The child developed pneumonia at the age of 2 months and died. One year later she had a female child with hydrocephalus delivered in the Government hospital in the district. She also had a miscarriage. As a result of this she developed depression and there were frequent family altercations since she was considered to be unlucky. This time she delivered a male child in the primary health center but the baby died very soon after birth due to breathing problem and slow heart rate. 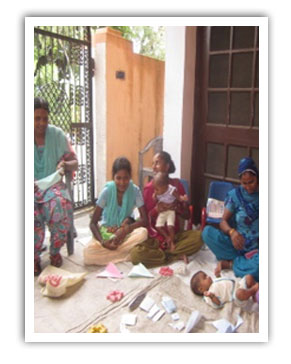 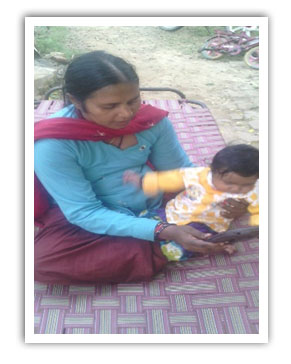 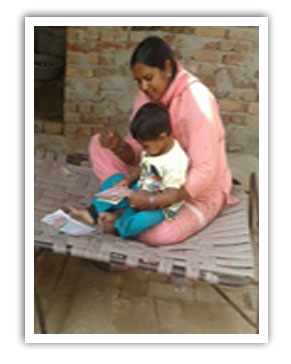 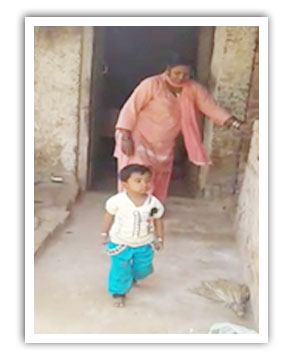 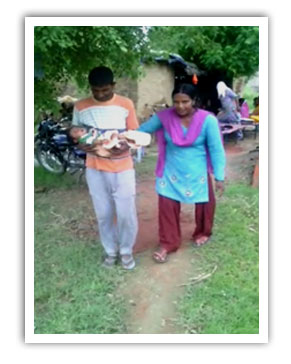 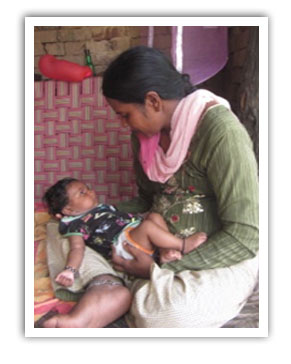 As a consequence of these tragedies, she was very depressed and stopped socializing. She was not getting pregnant for which she started some treatment from local village healer  (kalyanghirt and capsules). He gave her some faith healing also. SWACH field worker on a home visit found her to be weak and depressed. He counselled her and her hemoglobin was less than 7 grams/dl. After a lot of interactions she went to a gynaecologist recommended by SWACH staff in the district hospital. She agreed to get investigations and take treatment from that hospital but at the same time continued treatment and followed rituals in her village. Her health improved over the next few months and she started to come out of her depression.  She became pregnant again but did not disclose it even to her family members. However, she confided with SWACH staff a mother child protection (MCP) card was prepared and she was helped through multiple home visits and phone conversations to comply with antenatal care,remain happy, take rest, talk to her baby in the womb play with her baby and interact with the baby. She was counselled about birth preparedness the gynecologist in district hospital accepted that she would attend this woman during labour. She delivered a female child by C section with birth weight 3.3 Kg. Baby was put on skin to skin contact immediately after being born and as per her desire the baby was put to breast the next day. She had some difficulty breast feeding after she returned home but this got corrected by the counselling from SWACH phone conversation with doctor from SWACH and family support. She spent a lot of time with her baby, she held the baby close to her face, stroked the baby from head to toes, called her by her name and massaged her twice a day. She talked to the child burped the baby and held the baby close to her as per advice.

Despite her positivity, her baby cried excessively in the neonatal period and upto about 2 months age. She went to the temple but at the same time practiced what SWACH staff counselled. She picked up the baby, burped her, stroked her and did not get angry or frustrated. She sang rhymes and loris(Lullaby)as per guidance from SWACH to her child and this helped to calm and soothe the child. One evening she gave medicine to stop her baby from crying but after discussion she got convinced and stopped medications. She combined feeding with play and observed very carefully what the baby likes. “I found that she enjoyed my face early in life, she liked picture book, soothing massage and lullaby at sleep time”. Sleep was a problem during the first 2 months but after that she is pretty regular about sleep. M was convinced about the usefulness of messages on the phone and getting advice for minor problems and concerns. “ My phone did not work for about 2 weeks This was very bad time since I had problems to discuss with SWACH I asked my husband to get the phone repaired urgently so that I am not deprived of the chance to discuss problems and find solutions from SWACH staff”. Subsequently her husband bought a phone for her so that she could talk to SWACH staff while he was at work.

M breast fed her daughter exclusively on demand for 6 months. Her weight gain was satisfactory (3.9 kg at 42 days, 4.2 kg at 2 months 5 kg at 3 months age, 6 kg at 4 months, 7.2 kg at 9 months, 8.5kg at 13 months and 8.9 kg at 23 months). She spent a lot of time copying her child, and interacting with her. She said “ P keeps me busy throughout the day I feel very happy, my depression is gone and I am learning a lot. I share all the exciting experience with others in Anganwadi center” My daughter posed problems in taking semi solid foods between 6-8 months age and she became weak. According to her “ It takes quite an effort since there is confusion in the family’s thinking about feeding, my child spitting out food and becoming fussy often”.  She says that positive attitude, persistence and patience has helped her to overcome these problems.She has liked the MCP card, phone conversation and home visits. Even though the family is poor she has purchased a phone since she is convinced that this has helped her in providing very good care to her child for a period of more than 2 years.

She says that playing and talking has increased after 6-8 months age. M, her daughter as well as the father enjoy spending the time together.  She learnt walking soon after her first birth day and also started speaking at about 15 months age.

P is now 2 years 4 months old. Her weight is 9kg 800gm. She is an active child. She goes to anganwari centre daily along with her mother. She talks and plays with other children. She helps M in household work and copies whatever the mother does in the household. In the household work copying each other is great fun. M also involves the child by talking to her, and praises her whenever she does something good. M is now 3 months pregnant. M says “ I never thought of pregnancy since I was convinced that we should provide the best care to the little girl that we have” She has got herself registered and her MCP card has been made. Her husband is doing well in his work. They all are very happy and looking forward to having another healthy baby.